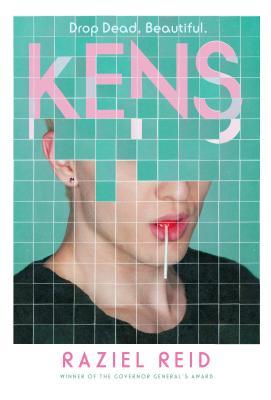 (Thanks to Netgalley & Penguin Teen, I received an eARC)

Heterosexuality is so last season: Kens is the gay Heathers meets Mean Girls, a shocking parody for a whole new generation.

Every high school has the archetypical Queen B and her minions. In Kens, the high school hierarchy has been reimagined. Willows High is led by Ken Hilton, and he makes Regina George from Mean Girls look like a saint. Ken Hilton rules Willows High with his carbon-copies, Ken Roberts and Ken Carson, standing next to his throne. It can be hard to tell the Kens apart. There are minor differences in each edition, but all Kens are created from the same mold, straight out of Satan’s doll factory. Soul sold separately.

Tommy Rawlins can’t help but compare himself to these shimmering images of perfection that glide through the halls. He’s desperate to fit in, but in a school where the Kens are queens who are treated like Queens, Tommy is the uncool gay kid. A once-in-a-lifetime chance at becoming a Ken changes everything for Tommy, just as his eye is caught by the tall, dark, handsome new boy, Blaine. Has Blaine arrived in time to save him from the Kens? Tommy has high hopes for their future together, but when their shared desire to overthrow Ken Hilton takes a shocking turn, Tommy must decide how willing he is to reinvent himself — inside and out. Is this new version of Tommy everything he’s always wanted to be, or has he become an unknowing and submissive puppet in a sadistic plan?

This book just wasn’t for me, while I see what the author was going for as a message it just wasn’t the way to go for me. I really liked the idea of a retelling of Mean Girls and that’s what originally made me request this one. The writing style really took me a while to get used to, but eventually I learned to appreciate it. I loved the fact that there was so much diversity as well.

There was a ton of pop culture references in the book and I just don’t feel like it was hitting the mark, for me personally. I felt more like all of these references were being thrown at me, where as maybe not trying so hard may have worked better.

The whole plot point at the end (sorry can’t spoil it here), was just outrageous to me. I cringed so much while reading the book as a whole I thought there was no way it would be able to hit me any more, but wow…. It did. I get that the author was using dark humor, satire etc. but for me it just wasn’t working. I was simply mortified, throughout most of the book.